14 Jun, 2021 14:10
Long time no see, eh? Seemed like I had nothing better to do this weekend so I've decided to check what's new (and unsolved) on Crackmes.one
I've picked "pranav's FinalFight crackme", due to the high difficulty rating, but it turned out it's more annoying than difficult.
So, without further ado, let's do this.

The crackme comes with a cheesy readme:

Readme.txt"Hello, son. As you know by now, the coloradians have taken down all the 6 outpost planets, leaving us with just this home planet, and now they are coming for this. What little defence we have left will be no match for those damn battlestations of theirs. I had fear that this moment may come, and as a last resort, I had planted 2 of our best stealth operatives on one of their battleships at the cost of ten thousand soldiers. Their mission is, to access the nuclear warhead control facility and launch their own warheads at them, so that we can hopefully get an edge in the final fight. One of them managed to access and send their Nuclear warheads control program, but the other one was captured and killed while trying to obtain the secret code to launch the missiles. This is the fight to save us from extinction and we cannot stop no matter the loss."

"And that is where you come in, mister. You are the greatest hacker known in our entire system and it is time to put your skills for our homeworld. You should analyse the program and identify the correct code of the program, or else they will destroy our homeworld too, ending our civilization. There is no time to waste, our remaining operative, and you are the last hope of our civilization. May luck be with us..."

Mission: Find the correct code and upload it along with how you cracked it in text/pdf file to the main server. Make sure to include the details.

Restrictions: No patching is allowed. Patching it here won't change the actual program in their battlestation.
So, no patching, which is good because patching means you are halfassing it.
The crackme is tiny - less than 50 kilobytes, and it seems it's written in C (MinGW's GCC).
Directly running it prints the input prompt and entering a random code gives us the bad ending as expected:

Because there was no packer that DiE could recognize, I just throw it in IDA as usual.
The code doesn't looked obfuscated and the entire main() procedure looked like this: 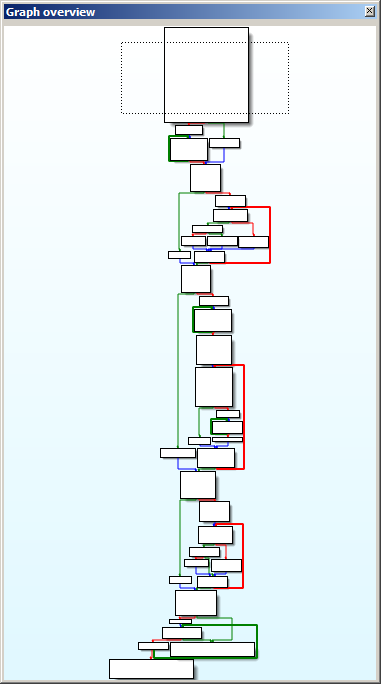 Obviously there are some loops going on in the middle but let's start from the top:

The "welcome" message is printed out, some unknown buffer is filled with 0xBF, 0xA3, 0x43, 0xAB and 0x99, and the user input is requested in the end.
Skipping the loops, I went to the end of the code:

Some check against 0xBF, a loop that compares bytes and depending on the final result we'll either get the good ending or the bad one.

The final loop compares 5 bytes (including the first 0xBF), and if we start from the second, it obviously compares the something with the five bytes stored in the beginning of the procedure.

Using IDA's graph view, I can easily distinguish 5 separate loops, performing some basic math calculations on the user input.
The first one is pretty simple:


Past the loop, is this entire code:

Looks like it does complicated stuff, but this is basically implementing a modulo of 0xFF over the result of the loop.
And before you think I figure that by myself - no, I've used IDA's decompiler.

The exact code is used multiple times (well, five times to be precise) with each loop, so from now on just keep in mind that each loop result will perform a modulo(0xFF) to its result.

Now back to the code.
Taking a quick glance of the rest of the loops, I basically have five different custom checksum algorithms, performed over the user input.
The LOBYTE result of each of these should be equal to the appropriate byte from that mysterious buffer from the beginning.
So, for the first loop, the LOBYTE(result) of it should be equal to 0xBF, the second loop should result in 0xA3 and so on.

To solve this I have to basically bruteforce it, which is not cool and I will totally do it in the worst possible way.
First of all I have to implement each checksum algorithm crc_p1() to crc_p5().
Next, if i just try to blindly permutate user code and run it through all those five checksum algorithms, it will take days if not ages in order to get a correct hit.
So, instead of this, I'll do it like that:

That way if some of the check stages fail, I won't have to spend time calculating the rest.

Finally I need a good permutator, but I'm not a good coder, so in my case any would work:


My code is ready, so the final step is play the waiting game.
I didn't care that much to wait for a second collision that will produce the correct results, so the first one was good enough for me - "aaaaxqB7ch":

And here's where I should start explaining why a good, difficult crackme shouldn't rely on brute forcing.
See, if I give you the following code:

This is hard. You will never figure that the secret password is actually randomly tapping my keyboard to produce the string "asdjkashdaskjhdjksakhdsakjdhjsad".
However, this is not a quality crackme.

I hope you get the hint.
Code implementation can be found here: http://nullsecurity.org/download/1cce1ff0936f6689aeac0debc1a62624