16 Aug, 2011 16:10
A few days ago while unpacking some VIS3 archives from the game "A New Beginning" I noticed that all of its PNG files were broken. And by broken I mean you can't view them nor edit them.
Seems like the authors wanted a little more protection on their huge amount of artwork (I really mean it, they put a lot of effort to draw and paint that game!)

Of course if someone wishes to modify the game, for example - to translate it in some other than the original language, he will fail miserably, so I decided to write this... short article on how to fix these images.

The first two DWORDS are the width and height of the image, and you may have already noticed that these in 00000060.png are way too big to be right - 0x6164319D for width and 0x6661338F for height.
It's obvious that these two were wrong so what can we do about it to fix them?
Well, we can always try to blindly guess its dimensions but that will take years for 1 image, and we have to fix probably more than 1000.

Then lets take a look at the PNG chunk specifications.

Seems like the chunk checksum is actually the original one that is calculated before obfuscating the width and height DWORDs.

Knowing that, I can "exploit" it to get the real width and height and restore the image.
The exploit is actually a simple brute force that will try every possible dimension, CRC32 the result and compare it with the original CRC.
If it gets a match - then that's the right dimension.
Now lets write some code that will brute the checksum.

and the output is:

Now lets change the broken width and height with this one, and see if the image will work. 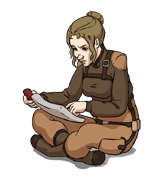 tha bad news is..the engine checks if the image it's manipulated, i mean, i can modifiy a bit an image, then encrypt again, but is not working, looks we have some crc file check there?
XpoZed 21 Jan, 2014 00:58
It's just a source snippet written in C. If you want to build yourself a fully working solution, you will have to write it yourself. My snippet will just give you idea about the attack vector i used.
Guest 20 Jan, 2014 23:18
Noob question, but how do you run that on windows?
Guest 11 Nov, 2013 18:06
#include <windows.h>
#include <stdio.h>
#include <direct.h>
#include <vector>